In the run up to their unmissable performance for Watergate at E1 on 9th November, we sat down with Tomas and Jeppe from WhoMadeWho – the eclectic and ever-evolving trio who blur the lines between DJing and live performance. Part of the original Watergate roster, the Danish wonders have been playing for almost two decades, transforming every event they play at with their unmatched energy. With six studio albums, remixes by the likes of Tale Of Us and Maceo Plex, and releases on labels like Kompact and Watergate, we were only too excited to get an opportunity to interview them.

Read what happened below!

Hey WhoMadeWho, thanks for chatting to us ahead of Watergate’s milestone 10th birthday in London next weekend! It’s an exciting time, as you and other artists make your debut at London’s latest Warehouse hotspot on November 9th; E1. How do you expect the venue will size up against your home in Berlin?

First of all, we haven’t been to London for ages, and it seems like a lot of new exciting things are happening in the scene. Both London and Berlin have had a great culture for raving even since the 80s, so in that sense we are pretty sure that the crowds in both places are educated and ready to party hard. 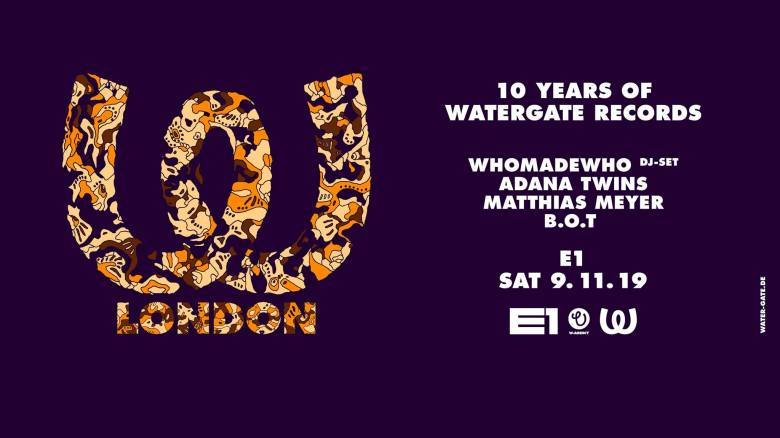 Being part of such a prestigious family like Watergate from the early days, how do you feel it’s changed during your time?

That’s the good part, the spirit from ‘back in the days’ still isn’t there, but still, the place has followed the time. The club has gotten renovated over the years and the crowd has circulated over the years which is normal – but all in all Watergate is as awesome as the first time we played.

Playing in an iconic venue like Watergate many times must have had some stand out moments – is there one that you’ll always remember?

I especially remember one event in 2012-ish at Watergate. I was in Berlin working on a collaboration between Tale Of Us / DJ Tennis and myself. Tale Of Us had just done a remix of our song “Every Minute Alone”, and we were bouncing off a lot of different ideas together. We also talked about how to jam this remix and perform it live with them at their upcoming Watergate show. I really liked this open-minded approach to club music, and got very excited about it. But at the time of the event, some Berlin nightlife randomness occurred, and the jam never actually happened. Yet, in the later years, I feel that WhoMadeWho have been picking up on that concept a lot.

Your hybrid-live show has proved to not only be a fan favourite, but also push the envelope for production. How did you guys come up with the concept?

It all started at Sonar around 5 years ago, Maceo Plex booked us for the Ellum party which didn’t really make sense for the live show. So we did a DJ set with some vocals and synths instead. It was extremely fun and turned out great with the crowd also, so we decided to do this more. Since then our DJ shows have morphed into two types actually. The DJ set which is two of us playing our favourite disco/techno records & own songs with live vocals and synths, and the hybrid-live show which is turning more and more into a full ‘electronic’  live show, with all 3 of us including a bunch of fun instruments on stage and only original WhoMadeWho songs in various versions.

Playing a range of clubs around the world, how does it differ from performing as a live trio vs the DJs?

When we do the DJ set, it’s way more open than when we do a live set. When we play live we prepare a fixed setlist in advance of the show, and do a long soundcheck etc. It’s coordinated with the sound engineer, light guy and visuals person. In the DJ set it’s more open. Depending on the vibe in the club, the previous Dj and so on. It’s more like painting on an open canvas and normally we play 2-4 hours here instead of the live set which is 75 minutes.

Your upcoming performance for Watergate’s 10th birthday in London will see two of you playing a DJ set rather than your live show. What type of set are you planning to play on the night?

So the good part about DJing is that we can always go with the flow and we are not limited by a planned setlist, so basically everything’s open. A few things are for sure, we always tend to land somewhere between psy-disco and harmonic techno. Also at some point, Jeppe will jump on a table and sing!

Your genre-bending sound is quite refreshing in the modern era. How did you approach the EP with Artbat this year, considering their heavier tones?

The best parts of our career have always come naturally without too much overthinking. The whole Watergate compilation came super natural, a lot of friends sent us some good music and we mixed it together. The same thing goes for the Rampa and Artbat collabs, which both had good success this summer. I think the important part is that our musical and vocal parts always have the ‘sound of WhoMadeWho’ – so even if they get remixed or re-produced, it will always be somehow a WhoMadeWho song. Working with Artbat came super easy for us, they are great producers and both tracks got ‘upgraded’ for the club, but not too far away from our sound.

You’ve had a string of incredible remixers work on your tracks – what’s your favourite and why?

The quite unknown Saschienne remix of ‘Never Had the Time’, is our current favourite – it has this eternal flow and beautiful chord-progression. We play it in most DJ sets, it’s quite mellow but works well on the dance floor.

Can you define WhoMadeWho in five words or less?

Finally, If you could go back to any time in Watergate’s history over the past 10 years when would it be and why?

I would go back to October 2013 and do that jam with Tale Of Us… Would love to revisit the fragile, open state of mind we all shared there.

Thank you for your time and all the best for the 10th birthday celebrations!

Don’t miss WhoMadeWho’s performance at E1 for 10 Years Of Watergate Records alongside Adana Twins, Matthias Meyer, and B.O.T this Saturday.