Saturday 24th November sees the musical paradox of Berlin’s legendary Afterlife return to London, for a day of mind-warping musical finesse. Having continued to captivate techno enthusiasts over the past few years, the brand makes its second appearance at London’s most exciting venue; the cavernous press halls of Printworks. Ahead of the show we’ve picked our five must see acts, to prepare you for the magical journey ahead.

Recondite
The German born Lorenz Brunner aka Recondite will provide something extraordinary to the industrial press halls. Performing live, Brunner has developed the ability to cater for any audience, ensuring this by analysing his surroundings and adapting track selections to bring the room to life. This makes for truly unique and dynamic sets, which explore the very essence of electronic sounds.

Nominated for the DJ Awards 2014 in the Electronic Live Performance category, whilst in the same year having his EP “Caldera” reaching Beatport number 1, demonstrates how well regarded Recondite is by peers and fans alike. With his recent release “Rainmaker” on the Afterlife label, it’s only fitting he joins the line-up to give the EP a road test.

Antigone
On duties in room 2 is the Parisian at the forefront of France’s resurgent techno scene. With a more melancholic approach to his sets, he quickly garnered a residency at Concrete which he held for over 5 years, while also touring the world bringing his more diversified side of techno with him.

His “Forbidden Works” EP, released on acclaimed Construct Re-Form, drew attention that has only increased over the years, and has led to releases on PoleGroup and Dement3d to name just a few. Known as a curator for eclectic techno, the Frenchman will be sure to draw crowds in the second arena.

Fideles
The second Italian duo to feature on the lineup along with Tale Of Us themselves, Daniel Aprile & Mario Roberti have had a storm in 2018, with their Cerchio EP on Innervisions sub label Exit Strategy as well as featuring on Afterlife’s favoured Voyage Mix.

Known for their melodic and mesmerising layers, their track Lotus featured heavily in sets all over the world and was regularly represented by Tale of Us, characterised by a warm, resonant melody that’s primed for the peak hours. Their clean approach to production and mixing make these guys a set not to miss. 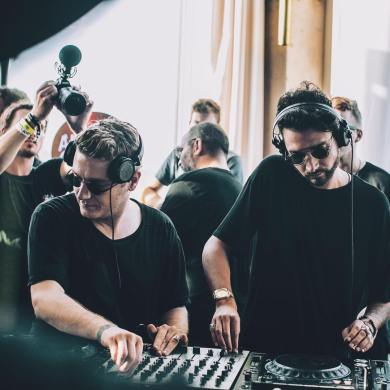 Adriatique
The Swiss duo of Adrian Shala & Adrian Scheizer are world renown for their spellbinding and hypnotic productions. With over ten years of experience as a pair, they’ve crafted a vast discography of house and techno tracks during their time. A stellar remix of Kraak & Smaak – “The Future is Yours” along with releases such as “Grinding Rhythm” on their own Siamese label have seen the duo climb the industry ranks to their status today.

There’s no doubt the Adrian’s will have every base covered for their performance, taking us through a journey of sullen melodic techno and enthralling uplifting house to tingle the senses. Playing to Printworks’ vaulted space and vast dimensions, Adriatique will orchestrate a voyage of sound, transforming the site into an industrial cathedral.

Tale Of Us
The Italian duo Carmine Conte & Matteo Milleri, best known as Tale of Us, changed the industry with their wave of soundscape, avant-garde techno which has been creeping onto dance floors across Europe and the rest of the world. With rumbling lows, lush rhythms, and emotional melodies, their music has impacted and influenced numerous artists and fans alike.

With releases on Visionquest, Hawtin’s M_nus, and the legendary R&S, it was only a short amount of time before they forged Afterlife: An odyssey through the realm of consciousness. The result has shifted fans into alternate dimensions and taken them to the astral plane through compelling production and enthralling sound.

Like the enigmatic duo say: All good music should tell a story. Tales of experience. Tales of joy. Tales of love, lost and won. A Tale Of Us.

With these 5 acts in mind, each offering their own carefully crafted sound, complemented by the venue’s spectacular light show which Afterlife will no doubt add their signature touches to, their return to Printworks is looking like one for the history books.