Because nobody wants to let go of festival season just yet...

Let’s be honest, nobody enjoys seeing the end of the summer festival season. With November nearly upon us, the cold, rain and probably snow (god forbid) is all we’ll be seeing for the next 6 months at least. Thankfully, for those who simply can’t stand missing the sun, we’ve collated some of the globe’s toasty festival destinations, to keep your temperature up during the brisk British winter.

Lost Paradise – Australia
The perfect solution to see you into the New Year whilst basking in the Aussie sun. The four day and night extravaganza takes place in a beautiful valley, surrounded by luscious green hills buried deep into the Australian suburbs. With plenty of activities to keep you entertained such as yoga, fancy dress and a killer lineup including the likes of BICEP, Korean star Peggy Gou and the live machine master; KiNK, there’s plenty to whet your appetite. Multiple stages each with their own unique design add character to this musical wonderland. The event takes place from the 28th December till the 1st of Jan 2019, and will no doubt be a long weekend to remember.

Epizode – Vietnam
10 days of pure madness is the simplest way to define Epizode Festival in Vietnam,  running from the 28th December all the way through to the 8th January. Situated on Vietnam’s largest Island, Phu Quoc, the festival’s aim is to create a whole new experience for the region of Southeast Asia, with a strong focus on music and love for the arts. A perfect opportunity to soak up some vitamin D with the location’s ocean beaches and tropical palm trees, it’s intertwined as a calming vacation as well as a festival. The setting on the island is surreal with plenty of access to waterfalls, diving experiences and mesmerising sunsets. At night the paradise comes alive as the music starts and the mesmerising lights turn on, with techno queen Nina Kraviz, the live sounds of industry legend Mr. G, Ricardo Villalobos, Seth Troxler, tINI and plenty more providing the soundtrack to the festival. 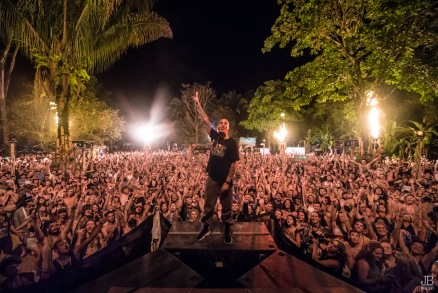 Envision – Costa Rica
Situated on the borders of the Costa Rican jungle where the sand meets the sea, the tropical setting is the perfect location for a weekend of sun-soaked dancing. Consisting of three distinct stages, each hosting a specific style of sound from tribal trance to underground house. The lineup running from the 28th February to the 3rd March boasts Burning Man’s Lee Burridge, Latin house innovator Nicola Cruz and dance sensation Sabo. Away from the music, a huge focus for the festival is on health and wellbeing, with world class yoga instructors on hand to help you detox from the madness within the blissful location.

Esto Es Tulum – Mexico
Situated in the beautiful ancient grounds of Tulum in Mexico, with just under a month of parties scheduled between the 28th December and 26th January, there’s something for everyone in this house & techno getaway. Full lineups are still TBA, however the opening and closing parties feature nail-biting additions from Ibiza powerhouse brand; Circoloco. Seth Troxler, Damian Lazarus, Blond:ish and William Djoko are all confirmed to play to 7000 ravers in the party destination. The surrounding area offers luxury hotel rooms only a few steps away from the Caribbean sea, whilst the festival area comprises of wood, woven basket and green decorative staging to immerse viewers in the vibrant scenery.