Next month, one of the longest standing brands in Ibiza makes it’s debut at London’s industrial stronghold; Printworks. Circoloco have held their weekly spot at Ibiza’s underground kingdom DC-10 since 1999, curating the finest DJs from across the globe every Monday on the White Isle. Away from the never-ending roster of talented artists, the party has become widely known for it’s signature vibe and one of a kind electric atmosphere.

Maintaining a straightforward but effective party formula since their humble beginnings, the Circoloco mantra is simple; come together to share a deep love of music on the dance floor. No frills, no fuss, no nonsense – just straight up, inimitable club vibes.

Their Printworks debut marks only the second UK show for the brand this year, following We Are FSTVL in May. Previous lineups during their reign on the Balearic island have been filled to the brim with fire-starting selectors. Celebrating their rare London visit, will see a lineup featuring another healthy cocktail of regulars and international heavyweights.

Desolat boss Loco Dice is the first name on the team sheet, who’s fast paced hip-hop inspired beats will no doubt will feed off the crowd’s energy. Joining him is fan favourite Skream, Ibiza legend; Clive Henry, FUSE residents Enzo Siragusa & Archie Hamilton, a special b2b from Rampa vs &ME, DJ Tennis and a host more.

With the venue’s awe-inspiring production and sound, which will dye the venue in Circo red, matched with the infectious party vibes orchestrated by some of the best players in the game, this showcase is looking like one to remember. 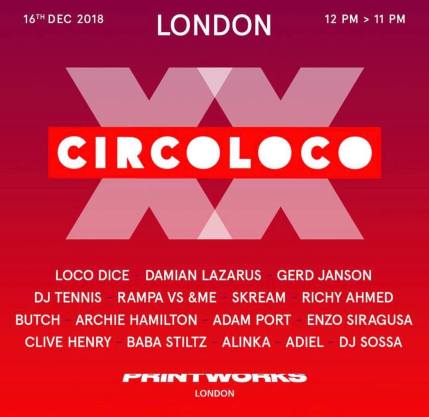