Skip to content
Claude Vonstroke, Dense & Pika, Heidi and Paul Woolford are amongst the stacked lineup

Manchester’s very own Solardo return to their hometown this month, bringing with them a lineup bursting with talent. The past three years have been a whirlwind of  success for the pair, as their infectious energy and charisma pulled them through the ranks to international stardom. From chart topping Beatport tracks, to featuring at some of the world’s most iconic venues, it’s been quite a ride for the two lads from Manchester.

After a season long residency at Ibiza’s latest super club; Hï alongside industry figurehead Eric Prydz, for the first and only time, a double helping of the duo’s own brands will take over THE WAREHOUSE PROJECT’s famous Store Street venue. After a previous Solardo Sessions takeover on Boxing Day during last year’s WHP schedule, the pair will be no strangers to the event, which is due to say farewell to it’s current venue after this year’s programme.

The duo’s latest party concept “Higher” will host room one and two, with an eclectic lineup ranging across the house & techno spectrum. Claude Vonstroke’s signature Dirtybird sounds which have swarmed the scene of recent will join the bill, alongside LWE residents; Dense & Pika, Jackathon queen; Heidi and the inimitable Paul Woolford.  Room three will see a label showcase for Solardo’s already well established Solä Records. With promising talent such as Del-30 and Eli Brown alongside the likes of Huxley in control, there’s no doubt you’ll find yourself darting between all three rooms. 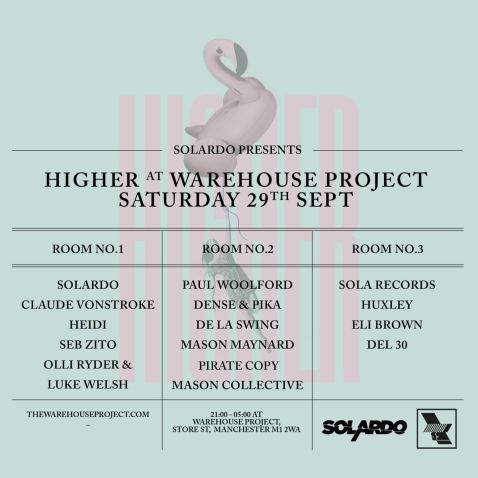 Final tickets for the event are available here.

Check out the full schedule and tickets here.