Last Sunday, one of house music’s most talked about brands returned to their home for the second instalment of ABODE In The Park. The London-born party has continued their upward journey in Ibiza for a consecutive year, with a chockablock season at Amnesia every Thursday. To round off another blinding summer, they gathered 12,000 of their ABODE family to Finsbury Park.

Located on the northern edge of inner London with ideal transport links, Finsbury Park was the location of choice for ABODE in The Park. The large, green open space acted as the perfect blank canvas to house 9 individual stages. With the likes of the Warriors terrace, LWE’s signature Warehouse previously used at Junction 2, Hotbed’s V.I.P stage, The Box, Secret Garden, The Cave, Danny Howard’s Big Top and ABODE’s stand-out main stage, ravers were spoilt for choice.

Weather conditions and an event on the day prior meant that some parts of the site had turned into a muddy bog, however ABODE were determined to not disappoint their eagerly waiting fans, laying wood chippings & raveable flooring around the venue. This unfortunately resulted in a delayed start with some left queuing outside, however meant that the show could go on!

Food & Drinks
The festival ran a tokens system to keep queue times to a minimum, with it being £1 for 1 token. A varied selection of fruity Brothers ciders and Relentless mixers were on offer, however alcohol prices were at the higher end of similar sized and located events, with beers, wine or a spirit and mixer costing £6.50. Water was a more reasonably priced £2.50 and could also be refilled at a nearby water tap for free.

Many food stalls were also available surrounding a sheltered seating area, with a choice of Thai, vegan pies, brownies topped with Oreo cookie dough and our pick of the bunch; chilli & jalapeno hotdogs.

Staff
Polite, friendly and approachable throughout. Bars were well staffed, leaving no more than a few minute wait to be served.

Crowd
Despite an initial delay to entry and the drizzly English weather, the crowd was energetic, smiling and infectious. Ready to party with their ABODE family regardless of the conditions, familiar faces and first time ABODErs danced together with the party’s famous positive atmosphere spread throughout the park.

Heat
With AITP coming at the end of the season, heat levels were naturally on the cooler side, meaning minimal ventilation is needed across the sheltered stages. However at points of the day, the Warriors Terrace did gain some heat with the sun beating down on the greenhouse-like stage. A fan system in place here would be great to see in future years. 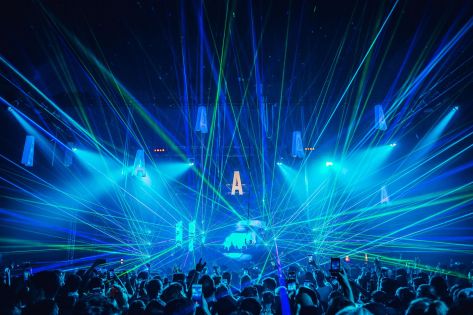 Production
Across the 9 stage festival saw some world class production in play. With each stage holding it’s own personality, carefully orchestrated set ups to reflect the theme and artists playing were in full swing throughout the day. From the darker, more stripped-back light arrangement in the warehouse, focusing on a few solid strobes and spot lights to the jaw-dropping laser and Co2 cannon show in the main stage, the production was a real highlight of the day.

Sound
Powered by one of the industry leading systems for festivals, L-Acoustics audio boomed through the many stages on offer, effectively covering the majority of spaces with clear and engrossing sound.  Some stages could have benefitted from additional speakers towards the rear of the tents, to ensure a 360 degree experience.

East End Dubs
At a slightly later than scheduled time, the minimalistic master; EED took his place behind the decks within the dark abyss of the warehouse. The low light room, comprising of an intently restricted amount of colour was the perfect setting for those deeper sounds. Entering the set with a more mellow vibe, “Just for kicks” by Leonardo Gonnelli eased the crowd into his performance. Further in saw a more serious toe tapper from Rich NXT’s titled “Serious”. The snappy female vocal stirring the crowd on and alluring us into the set. Keeping the crowd guessing his next move, the dub pioneer span Carl Craig’s disco rework of “Use me again” by Tom Trago with an emphatic response.

Cuartero b2b Hector Couto
Following on from East End Dubs saw a special back-to-back from two heavyweights in the tech house scene. Known well for their bass-driven groovers that add some fuel to the fire, the pair teamed up for an exciting hour and 45 minutes. Setting the tone from the outset, Marco Key’s “Re Evolution” instantly captured the crowd’s attention. Keeping the vibe funky, the pair later dropped Big Miz’s “The Bomb”; a feel good roller with heavy kicks that perk the ears of any raver. Shortly after came a standout moment from the performance, with Nic & Mark Fanciulli’s most recent banger “Star” tearing through the crowd as they sang along with the vocals. 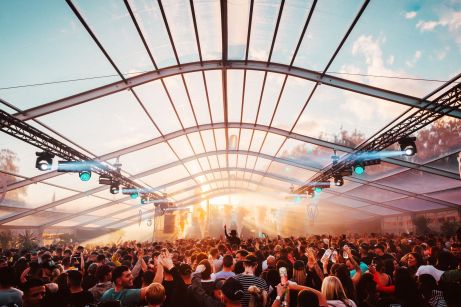 Max Chapman
With the festival in full swing, ABODE favourite and Resonance Records co-founder Max Chapman took charge of the Warriors Terrace. Firmly in familiar surroundings, Max’s distinctive style of poppy and bouncy tech was the perfect fit for a Viva Warriors showcase. Bringing with him those high paced beats as the sun shone down from behind the booth, “Damn True” by Proudly People set the wheels in motion for a set full of thrills. A particular highlight came from the hypnotic build up of Tom Middleton’s 2012 gem; “Penrose Steps”, leading to a heavy tech drop and unexpected blast of Co2.

Groove Armada
Filling a primetime slot found house music legends; Groove Armada on the ABODE main stage. After building a reputation both from chart success and underground stardom over the past two decades, Andy Cato and Tom Findlay had just the tools to bring their A-game to ABODE In The Park. Between them saw a comprehensive selection of tracks, dipping in and out of house sub genres. ANOTR’s floor quaker “Let Me Tell You” and Daniel Stefanik’s “Deep Inside” filling the early moments of the set, before some heavy hitters from one 2018’s standout producers; Eli Brown. “Hysteria” and “Burning” both erupting through the impressive main stage speakers. A shift of mood then brought Daft Punk’s “One more time”, much to the crowd’s approval before the euphoric Andrew Meller remix of Underworld’s “Born Slippy” left the atmosphere at an all time high.

After party
Fast forward to the after party at Studio 338, and those who weren’t ready to call it quits, made the trip over to Greenwich to continue the rave into the night. Special guest appearances from George Smeddles, Danny Howard, Secondcity and a wicked b2b from house legend MK and Kent DJ Chris Nottingham added the icing on the cake to an action-packed day.

Another year, another sold out festival for ABODE, and the brand which continues to grow shows no signs of slowing down any time soon. Coming back to their spiritual home off the back of a successful season at one of Ibiza’s most respected clubs; Amnesia, they did their home proud with a thrilling festival. Despite the initial delay to get into the venue, which arguably was out of their hands due to the dreaded english weather, the experience remained a positive one, with care taken in the form of wood chippings and flooring to ensure the show could go on in true ABODE style. 8/10