The British festival season is now well and truly underway, with some of the biggest names in the music industry travelling around the country to the UK’s patches of green open spaces. Recent years have seen a wave of pop-up festivals and smaller niche day events fly into the summer timetable, with London becoming a particular hotspot for small-medium sized shenanigans.

One of those starting their journey into the scene was Croydon’s first ever Butterfly Effect Festival. Held across the final weekend of July, the 28th-29th played host to the mixed genre festival’s inaugural year, with Sunday featuring a formidable “Warriors x Do Not Sleep” main stage line up.

The two brands, both known and respected individually have grown parallel to each other during their time in Ibiza, hosting separate residencies at some of the island’s top tier clubs. Butterfly Effect would mark only the second time they’d joined forces, following a successful stint at Off Week Barcelona a month earlier. With them brought a cocktail of musical talent to the London Borough, with Art Department,  Jansons, Secondcity, and label bosses Darius Syrossian & Steve Lawler.

Croydon’s Lloyd Park on the outskirts of London, was the venue of choice for Butterfly effect. 114 acres of open land made an ideal spot for the medium sized festival, providing space for 2 tent arenas and the central main stage.

Food & Drink
There was one main bar on the day with another in the VIP area. Prices were reasonable, although drinking spirits would set you back :

A solid variety of food vendors were also available, with crepes, burgers, duck wraps, fish & chips, steak and Thai on the menu. We gave the crepe place a go, and their Oreo crepe with chocolate shavings and white chocolate sauce blew our minds.

Staff
Bar staff were friendly and quick to serve, although were never really rushed off their feet throughout the day.  The same could also be said about security, who quickly but effectively got ravers through the door.

Crowd
Another example of why you just can’t predict the British weather. The hottest July on record, until Sunday 29th, when a day of rain and wind descended onto the South East. The dreary conditions had a noticeable impact on the day’s attendance, with a crowd struggling to form during parts of the day. That said, the crowd which did form towards the end of the proceedings was full of life and energy, brightening the dim day and raising the atmosphere. It is what you make it right?

Production
Delivered by a square 4 tier rig, holding an assortment of rotating beams, spot lights,  and strobes, made up the strong lighting display for the main stage. As the sun began to set, we saw the full effect of this set up, which fired captivating colours into the crowd and added suspense to those all important build ups.

Sound
A highlight of the festival for us. Given the residential area, the sound levels were far better than many big budget festivals we’ve been to in the capital. Provided by a Meyer Sound speaker system, two stacks either side and a row of front facing speakers fired sound into the crowd, easily reaching all corners of the space.

Secondcity b2b Detlef
Seeing us through until 6pm saw an impromptu b2b from two established artists in the scene. Despite the rain and short-formed crowd, the duo were all smiles throughout, throughly enjoying themselves and not letting the poor weather bring down the mood. Treating us to a set full of pumping tech house, it was a lively performance from the get-go. “Time Is Weird” by Cassimm set the tone nicely, easing the crowd in with a bouncy two-step beat. Picking up the pace as the rain hardened, Mike Vale’s remix of PEZNT – “Burek”, broke the tension built by the dreary summer day.

If anything was going to make us feel like we were on a tropical island with the sun shining, it was Secondcity’s tribal banger “Kwalenga”. Receiving an instant reaction from the small, but lively crowd, the funky tech house track perfectly relieved those rain filled inhibitions.  Towards the end of the set saw earlier act Jansons jump in on the back-to-back fun, with a rare b2b2b from the three which only added more flavour to the performance and relaxed the wet crowd.

Steve Lawler b2b Darius Syrossian
Closing the show with a special 3 hour b2b set were label bosses Steve Lawler and Darius Syrossian. Being the heads of two massive labels; Viva Warriors and Do Not Sleep, the two have some extensive experience between them, and just the tools to keep the crowd in high spirits. With the rain starting to ease off, and a larger crowd starting to gather, Lawler’s selection of Paul Woolford’s latest vocal bomb “Hang Up Your Hang Ups” was just what the doctor ordered. The track erupted through the powerful sound system, with a huge reaction from the crowd as they joined in with the catchy chorus. 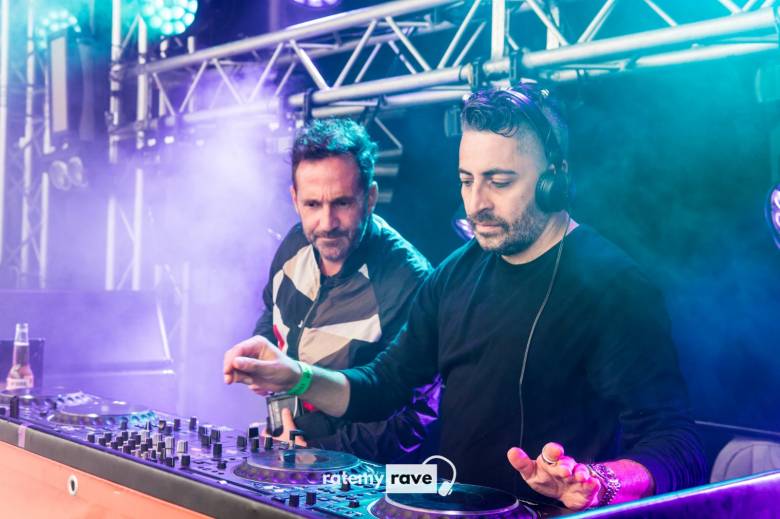 Just when we thought the downpour was over, the clouds darkened and with it returned the rain. However, it was no use for the atmosphere built by the duo’s performance, the crowd now fully embracing the rain to see the two heavyweight DJs in action, laughing and smiling in the summer showers. With the show entering it’s final half hour, Darius ingeniously mixed in a techno twist with Boddika’s VIP remix of “Mercy” by Joy Orbison, complementing the dark day perfectly. Following this saw Shaf Huse’s poppy remix of De La Swing’s “Face to Face;” to keep the energy high as we reached the dying moments of a day which had been salvaged by top draw performances.

An unfortunate turn of events for Butterfly Effect’s first outing, the unexpected rain and wind putting a downer on the day and obvious effect on the attendance. Despite this, there were plenty of positives to take away. The production and especially sound quality on offer easily rivalling, if not beating that of far bigger scale festivals in the capital. Top draw performances from the Warriors x Do Not Sleep camp picked up the pieces of a day which could’ve easily been a wash out, bring on next year. 7/10